Happy Thanksgiving! From all of us at Wagoner County GOP

Have a Happy Thanksgiving
from Wagoner County Republican Party 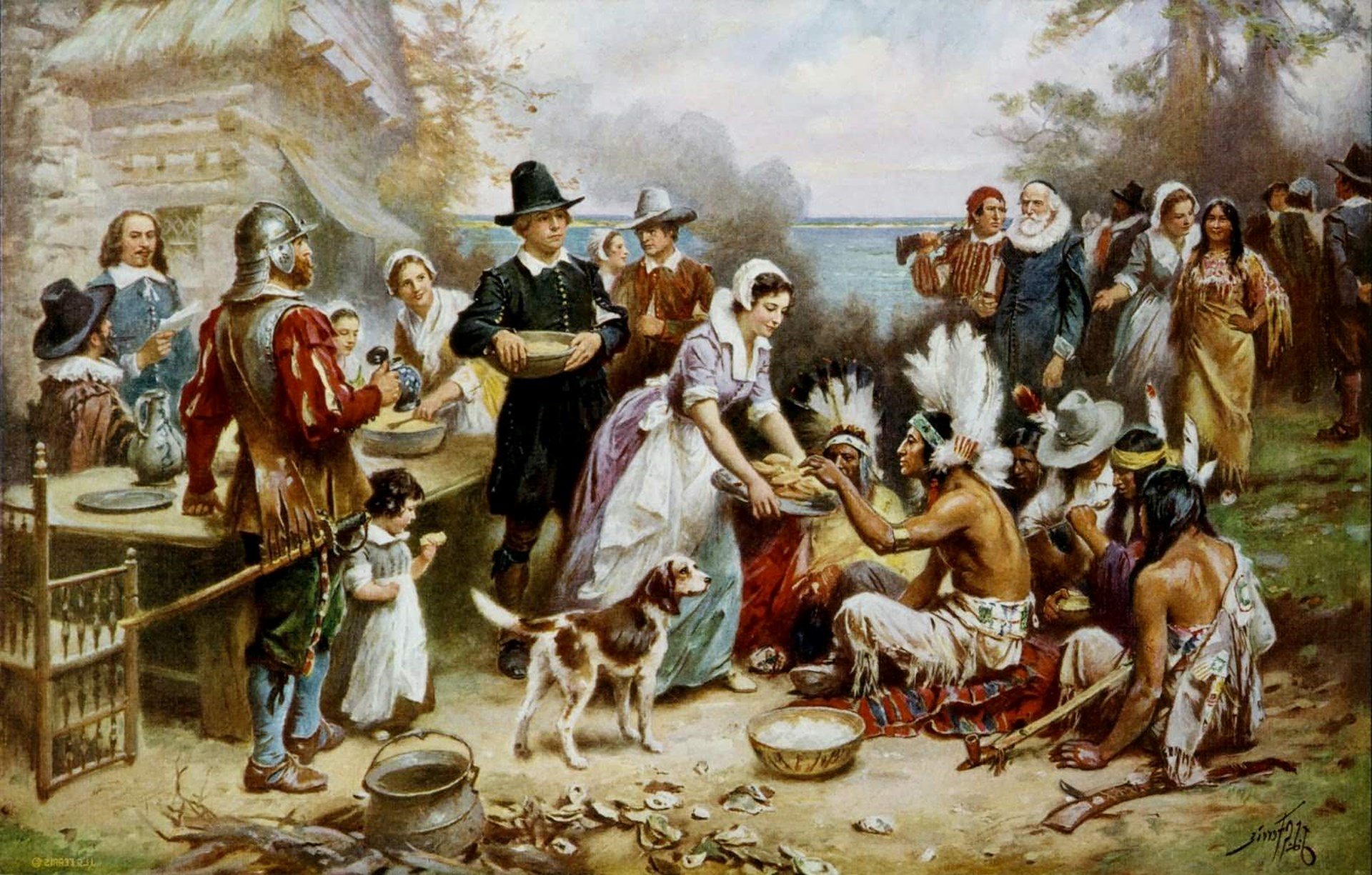 Recommended Reading At The Dinner Table

The Most Important Documents To Read This Thanksgiving

Last and not least, they cherished a great hope and inward
zeal of laying good foundations, or at least making some
ways toward it, for the propagation and advance of the
gospel of the kingdom of Christ in the remote parts of the
world, even though they should be but stepping stones to
others in the performance of so great a work.

If you only read from one book other than the Bible this Thanksgiving, make it Of Plymouth Plantation by William Bradford. And if you only have time for one chapter, make sure it is the fourth (transcription on next page). It is in this chapter that we learn about the true reasons why these homeschooling Pilgrims debated over whether or not they should risk their lives to go to America, the ultimate reasons for their departure (including concern over bad peer influences with their children), and their tremendous confidence in God. Most importantly, it is here that you read of Bradford’s multi-generational vision of victory. Remember, from the approximately fifty survivors of that first winter, more than 30 million progeny have descended.

Chapter 4 - Reasons which led-the Congregation at Leyden to decide upon Settlement in America.

After they had lived here for some eleven or twelve years, the period of the famous truce between the Low Countries and Spain, several of them having died, and many others being now old, the grave mistress, Experience, having taught them much, their prudent governors began to apprehend present dangers and to scan the future and think of timely remedy. After much thought and discourse on the subject, they began at length to incline to the idea of removal to some other place; not out of any new-fangledness or other such giddy humor, which often influences people to their detriment and danger, but for many important reasons, the chief of which I will here briefly touch upon.

First, they saw by experience that the hardships of the country were such that comparatively few others would join them, and fewer still would bide it out and remain with them. Many who came and many more who desired to come, could not endure the continual labour and hard fare and other inconveniences which they themselves were satisfied with. But though these weaker brethren loved the members of the congregation, personally approved their cause, and honored their sufferings, they left them, weeping, as it were; as Orpah did her mother-in-law, Naomi; or as those Romans did Cato at Utica, who desired to be excused and borne with, though they could not all be Cates. For, though many desired to enjoy the ordinances of God in their purity, and the liberty of the gospel, yet, alas, they preferred to submit to bondage, with danger to their conscience, rather than endure these privations. Some even preferred prisons in England to this liberty in Holland, with such hardships. But it was thought that if there could be found a better and easier place of living, it would attract many and remove this discouragement. Their pastor would often say, that if many of those who both wrote and preached against them were living where they might have liberty and comfortable conditions, they would then practice the same religion as they themselves did.

Secondly, they saw that though the people generally bore these difficulties very cheerfully, and with resolute courage, being in the best strength of their years; yet old age began to steal on many of them, and their great and continual labours, with other crosses and sorrows, hastened it before their time; so that it was not only probable, but certain, that in a few more years they would be in danger of scattering by the necessities pressing upon them. Therefore, according to the divine proverb ( Prov. xxii, 3), that a wise man seeth the plague when it cometh, and hideth himself; they, like skillful and hardened soldiers, were wary of being surrounded by their enemies, so that they could neither fight not fee, and thought it wiser to dislodge betimes to some place of better advantage and less danger, if any such could be found.

Thirdly, as necessity was a task-master over them, so they themselves were forced to be, not only over their servants, but in a sort over their dearest children; which not a little wounded the hearts of many a loving father and mother, and produced many sad and sorrowful effects. Many of their children, who were of the best disposition and who had learned to bear the yoke in their youth and were willing to bear part of their parents' burden, were often so oppressed with their labours, that though their minds were free and willing, their bodies bowed under the weight and became decrepit in early youth, the vigour of nature being consumed in the very bud, as it were. But still more lamentable, and of all sorrows most heavy to be borne, was that many of the children, influenced by these conditions, and the great licentiousness of the young people of the country, and the many temptations of the city, were led by evil example into dangerous courses, getting the reins off their necks and leaving their parents. Some became soldiers, others embarked upon voyages by sea and others upon worse courses tending to dissoluteness and the danger of their souls, to the great grief of the parents and the dishonour of God. So they saw their posterity would be in danger to degenerate and become corrupt.

Last and not least, they cherished a great hope and inward zeal of laying good foundations, or at least of making some way towards it, for the propagation and advance of the gospel of the kingdom of Christ in the remote parts of the world, even though they should be but stepping stones to others in the performance of so great a work.

These, and some other similar reasons, moved them to resolve upon their removal, which they afterwards prosecuted in the face of great difficulties, as will appear.

The place they fixed their thoughts upon was somewhere in those vast and unpeopled countries of America, which were fruitful and fit for habitation, though devoid of all civilized inhabitants and given over to savages, who range up and down, differing little from the wild beasts themselves. This proposition when made public, found many different opinions, and raised many fears and doubts. The hopeful ones tried to encourage the rest to undertake it; others more timid, objected to it, alleging much that was neither unreasonable nor improbable. They argued that it was so big an undertaking that it was open to inconceivable perils and dangers. Besides the casualties of the seas, they asserted that the length of the voyage was such that the women, and other weak persons worn out with age and travail, could never survive it. Even if they should, they contended that the miseries which they would be exposed to in such a country, would be too hard to endure. They would be liable to famine, nakedness, and want. The change of air, diet, and water would infect them with sickness and disease. Again, all those who surmounted these difficulties, would remain in continual danger from the savages, who are cruel, barbarous, and treacherous, furious in their rage, and merciless when they get the upper hand, not content to kill, they delight in tormenting people in the most bloody manner possible; flaying some alive with the shells of fishes, cutting off the members and joints of others piecemeal, broiling them on the coals, and eating collops of their flesh in their sight whilst they live, with other cruelties too horrible to be related.

And the very hearing of these things could not but move the very bowels of men to grate within them and make the weak to quake and tremble. It was further objected that it would require greater stuns of money to prepare for such a voyage, and to ft them with necessaries, than their diminished estates would amount to. Many precedents of ill success and lamentable miseries befallen others in similar undertakings were alleged, besides their own experience in their removal to Holland, and how hard it was for them to live there, though it was a neighboring country and a civilized and rich commonwealth. It was replied that all great and honourable actions are accompanied with great difficulties, and must be both met and overcome with answerable courage. It was granted the dangers were great, but not desperate the difficulties were many, but not invincible. For, many of the things feared might never befall; others by provident care and the use of good means might in a great measure be prevented and all of them, through the help of God, by fortitude and patience, might either be borne or overcome. True it was that such attempts were not to be undertaken without good ground and reason, rashly or lightly; or, as many had done, for curiosity or hope of gain. But their condition was not ordinary; their ends were good and honourable; their calling, lawful and urgent; therefore they might expect the blessing of God on their proceeding s. Yea, though they should lose their lives in this action, yet might they have the comfort of knowing that their endeavour was worthy. They were now living as exiles in poor circumstances; and as great miseries might befall them here as there, for the twelve years' truce was now over, and there was nothing but beating of drums and preparation for war. The Spaniard might prove as cruel as the savage of America, and the famine and pestilence as sore in Holland as across the seas. After many other things had been alleged on both sides, it was fully decided by the majority to undertake the enterprises, and to prosecute it by the best means they could.

Source: A time for thankfulness. A family compendium on the importance of Thanksgiving day.

Your donations help get out our message out to get Republicans elected - We Need To Win in 2020!